President Biden appeared at the Electric City Trolley Museum in Scranton on October 20 to promote his domestic agenda and the hundreds of thousands of jobs that will be created to rebuild the nation’s degraded infrastructure.

There to meet him backstage was Scranton Local 81 Business Manager Mike McDermott.

The industrial city in northeastern Pennsylvania known most recently as the setting of the fictional Dunder Mifflin in “The Office,” Biden grew up there. Known as “Scranton Joe,” Biden strongly identifies with the town and its working class values. He is that guy, McDermott said.

He was witty, down to earth … it was like talking to a guy you’ve known 100 years,” McDermott said. “He definitely has that Scranton personality. I don’t care how long he lived in Delaware. He’s Scranton.”

They chatted about the important role the IBEW played to his campaign, endorsing Biden in February 2020, weeks before he would go on to clinch the Democratic nomination. “He was very appreciative of us and spoke very highly of Lonnie [Stephenson]. We discussed how much work the infrastructure bill would bring IBEW members.”

At the close of their conversation, McDermott said President Biden presented him with a two-inch diameter gold presidential medallion. “To my knowledge nobody else got one there that day,” McDermott said. 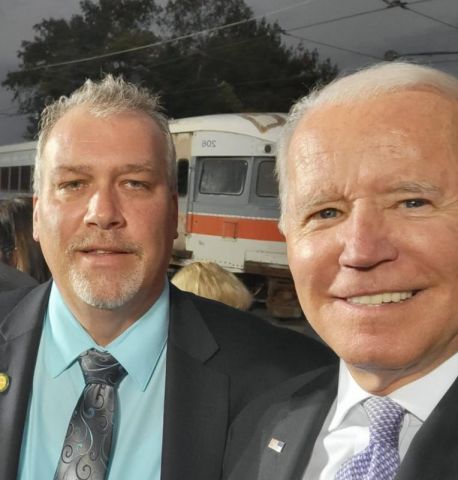